We Have To Find Our Way Back Home

At the poignant turning point in the true story hit movie, Lion, thirty-year-old Saroo Brierley longingly says, “I have to find my way back home“.  Home being six thousand miles away in the Ganesh Tilai neighborhood of Khandwa, India.  Born Sheru (meaning lion) Munshi Khan, when he was only five years old, “Saroo” found himself lost and alone a thousand miles from home.  Had he known how to spell either his name or the name of his neighborhood, young Saroo likely would have found his way back home much earlier.  But then, the world would have been denied his epic tale of hope, redemption and fierce maternal love.

My purpose here is not to review the movie, though I do highly recommend it.  For insight into what prompted my thoughts to follow, you should read Michael Gerson’s excellent Washington Post op-ed piece entitled, What the movie ‘Lion’ tells us about our vision of humanity.  Gerson’s keen insights led me to some of my own.

It seems that, like Saroo, we Americans need to find our way back home. We need to wake up to the grown-up reality that personal comfort is rarely a worthy goal. The things that really matter in life are not conveniently retained, rescued or redeemed.  They often require great sacrifice at seemingly the most inopportune times.  Too many of us have forgotten this ancient truth.  Perhaps even more were never taught it.  The result is a cultural ship set adrift without a rudder, manned by clueless sailors wringing their hands in constant anxiety, while watching the storm clouds gather on the horizon.

During an earlier poignant movie moment, in response to one of his college friends asking which part of India he was from, Saroo sheepishly says, “I’m adopted.  I’m not really Indian”. This, because he was rescued from an Indian orphanage and adopted by an Australian couple not long after the accidental train ride that took him so far from his birth mother, Fatima.  Saroo described his mother as beautiful, though his father abandoned her and the children, leaving Saroo’s mom to support her family as a common construction laborer. After Saroo disappeared, Fatima looked tirelessly for him, constantly traveling to the surrounding train stations in hopes of finding her precious son whom she fiercely loved.

In the meantime, at his new home in Australia, young Saroo was learning to accept the fierce love of his adoptive mum.  Sue and John Brierley could have had children of their own, but chose to rescue and adopt two orphaned Indian boys instead.  Saroo was the first and always assumed his parents chose adoption out of necessity.  Just before he returned to India to search for his birth mother, mum Sue set the record straight. The son she loved so fiercely was no second choice. Saroo was her chosen one.  As such, his became a love found, lost, found and found again story.  An amazing story penned between two maternal bookends separated by six thousand miles and twenty five years.  For the rest of Saroo’s story, you really must see the movie.

For the rest of this story, you need to know part of mine.  My wife, Elaine, and I are the proud adoptive parents of our own chosen one.  Named after me, Bradley turned 27 on January 8.  He’s happily married to his high school sweetheart and lives just a few miles from us.  Bradley became our fifth and final child by miraculous means chronicled elsewhere. Since becoming the last branch on our family tree, Bradley has been an incredible blessing to our family and is fiercely loved by every member.

Elaine and I have also been on the giving end of an adoption miracle.  As birth grandparents, many years ago we were honored to personally hand our first grandchild to her adoptive parents.  It was admittedly a bittersweet exchange.  One that Elaine grieved for many months.  But once completed, neither of us ever seriously questioned the choice made by her birth parents.  It was, after all, a choice motivated by brave love. 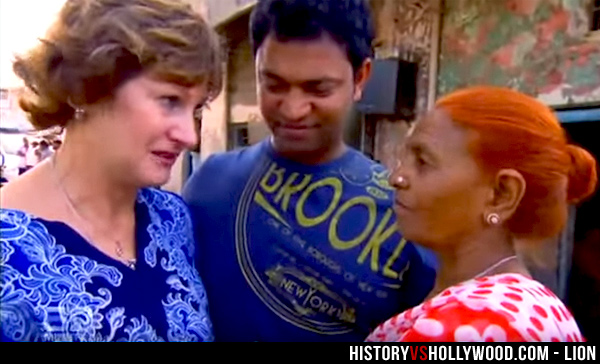 This picture is of the real Saroo Brierley with his mom Sue Brierley (left) and his birth mother Fatima (right) when they met in Khandwa, India.

During our forty years of marriage, Elaine and I have seen the perils of children parenting children. We’ve held the precious gift of life that many times only an adopted child can be. We’ve seen God turn mothers’ “mistakes” into life-saving miracles. We’ve heard the voice of God speak clearly on behalf of the chosen ones whose birth mothers were unable to care for them. Time and time again, we’ve seen mothers choose life when it was anything but an easy choice. But, it was always the right choice.

So, these are great stories, but what business do I have telling them on a business platform like this one?  Great question.  I tell these and many more life-affirming stories for one simple, yet profoundly important, reason.  I believe with all my heart in this self-evident truth:

This is why I’m In Business For Life and inviting you to join me.  Because we have to find our way back home.  To the place where we can once again, with clear eyes and pure hearts, ask God to bless America…and that would be great for business.