My Christmas Wish For You and Yours

Like a delighted child on Christmas morning, I recently discovered a special gift within the Biblical account of “The Christmas Story”:

“But Mary treasured up all these things and pondered them in her heart.” (Luke 2:19)

So, what were “all these things” that the mother of Jesus treasured and pondered?  The passage refers to the things that Mary had just heard from the shepherds who “were keeping watch over their flocks at night”.  That is, until an angel appeared and lit up the fields like the Fourth of July.  As impressive as that display was, it paled in comparison to what the angel said.  He proclaimed good news meant to bring great joy to all people…”today in the town of David a Savior has been born to you; he is the Messiah, the Lord”.  Then he went on to tell them how to find this very special baby…in a barn.  Really?

As Mary listened to the excited shepherds, her mind must have raced back to her own angelic encounter some nine months previous.  The angel’s name was Gabriel.  He told Mary, “The Holy Spirit will come on you, and the power of the Most High will overshadow you. So the holy one to be born will be called the Son of God” (Luke 1:35).  This far-fetched story was later confirmed by Mary’s relative, Elizabeth, who was pregnant with a child to become known as John the Baptist (Luke 1:39-45).  After that, six months of angelic silence before the first Christmas.

What was Mary thinking as she lay with her newborn son, surrounded by barnyard animals and her befuddled fiancé, Joseph?  Was her angel’s visit only a dream?  Had Elizabeth’s child truly leaped for joy at the unborn Lord’s presence or was she just being melodramatic?  Would God really allow His son to be born in such a lowly place…to an unwed mother?  None of it made sense, especially the virgin birth part.  But then, the shepherds came…

…and when they left, “Mary treasured up all these things and pondered them in her heart”.  One more time, God had confirmed to her the miracle of all miracles.  “Yes, it’s true”, she thought.  The God of the Universe chose to enter space-time history via the birth canal of an unwed teenage girl.  Oh my, there was much for this young mother to ponder.

This fresh insight into that first Christmas set me to pondering a related story in the life of our family.     Throughout my personal faith journey, God has reaffirmed His love for me and mine in a myriad of ways.  None more moving, however, then the way He arranged for the completion of our family with the addition of our fifth child.

His given name was Samuel Alexander.  One month before he was born, God revealed to my wife that “Samuel” was going to be our son.  Two months later, his birth mother called to ask for our help in finding adoptive parents for her newborn son.  With that, my wife said the words that would forever change the trajectory of our family –“we’ll take him”.

I nearly choked on my Hamburger Helper.  For you see, my lovely bride had failed to share her revelation with me.  And, unlike He did for Joseph, God had not sent an angel in a dream before rocking my world with this “good news”.  We had four children and a fledgling business at the time.  The last thing we needed was another child, so I thought.  Never mind the million or so childless couples in America who would have given anything to adopt this child…this chosen one.  In fact, there were a thousand reasons not to adopt and only one reason to adopt –because God said to.

It was bitter cold in February of 1990.  My best friend and I ran together every weekday morning at six o’clock.  Our constant banter kept our minds off the cold and our aching legs.  For the last three days, we had spent every minute of our run talking about one thing…my wife’s crazy notion about adopting a child.  Tim and I were in complete agreement.  It would be the biggest mistake of our lives.  But, Elaine was standing her ground.  How would we ever resolve this, the greatest conflict of our married life?

Before going in to shower, we stood shivering at the end of my driveway praying that my wife would come to her senses.  But God had us at “Amen”.  All heaven broke loose, as I looked up at Tim with tears in my eyes and said words I could not have imagined uttering until that moment.  “He’s my son, isn’t he”?  Without hesitation, Tim replied, “yes brother, I believe he is.” 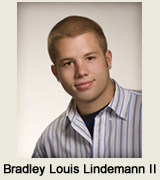 In the blink of a tear-filled eye, God changed the hearts of two best friends, confirming His plan to change the course of Lindemann family history.  His name is Bradley Louis Lindemann II.  And he’ll always serve as a poignant reminder of what God did for the human family over two thousand years ago –“a child is born, a son is given”.   His name is Jesus.  Perhaps there’s something in this story that will encourage you, like Mary, to treasure the truths of His story –The Christmas Story.

That would be my Christmas wish for you and yours.